I love understanding how amazing people, and in particular women, changed the world.

It certainly wasn’t from being demure.

In fact strong women who ruled were often called She Wolves! But I think it is wonderful to ‘Run with the Wolves’!

So I want to debunk some of the myths around a woman whose reputation was dower but who actually wasn’t.

The grand lady was Queen Victoria!

When Queen Victoria was 11 years old her governess made her record her tantrums in a Conduct Book.

We still have Victoria entries.

She sometimes recorded 3 tantrums a day.

This is because strong willed people follow the beat of their own drum even under tremendous pressure.

Obedient people obey and leadership is not about following other people’s rules!

Yet so often obedience is praised because it doesn’t rock the boat and wilfulness is stamped out!

The image we have of the Queen is swayed by the way her children wanted her to be remembered.

They burnt thousands of pages of her diary so she would be seen as domestic and docile but she was no such thing.

Victoria describes herself as ‘violently passionate’. In fact Rev Clive called her: “Such a little vixen.” (Wolves again!)

Tennyson declared: “One feels that the Queen is a woman to live and die for”.

So she created passionately different responses because she was a passionate person!

Yay great! So many people are so concerned about what others think they never are themselves!

She also spent a huge amount of time, 63 years, ruling her vast empire.

This was a time of tremendous change with science and industry leading the way, a much larger percentage of the population voting and slavery being abolished. 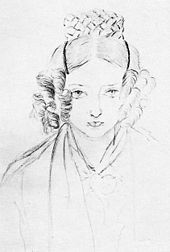 She influenced all these areas and provided stability in the face of change. In fact despite her image she was actually very radiacal and had a great sense of humour. All this while giving birth to 9 children.

How wonderful to know, that if you are wilful yourself or have wilful children, life will be impactful even if not accepted and understood.

That is the nature of wilfulness. It is the spirit of the pioneer, the person who wants meaning and adventure rather than mediocrity and acceptance.

I love this sketch she drew of herself being petulant at 16! She definitely knew who she was even when all around her wanted her to be someone else.

If you would like to find out more about how to be yourself and lift the shakles of other people’s expectations then come to 22 Principles of Success Love and Happiness with Pip McKay. Click Here for more details. Brisbane 11 March and Melbourne 25 March. The Sydney Season is finished until November.