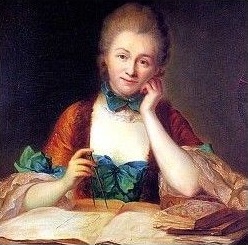 Of course you have heard of the famous equation E=MC2 and it goes without saying that Albert Einstein deserves huge praise for it.

But did you know that the equation could not have existed without a woman?

Her name was Emilie Du Chatelet and she proved and clarified E=MV2 (that is Energy = Mass x Velocity Squared).

She was also the first person to postulate that light travelled as a wave, wow!

Never heard of her? Yes, I know, few people have.

It is one of my passions to rectify that and honour the wonderful women of history.

One of the things I love about her is that she was no saint!

In typical French fashion at the time, it was considered normal have affairs for both men and women!!

The French understood that the upper classes had to marry for status and that might not be the person you loved.

So once Emilie had her three children she could fall in love with whomever she wanted – with her husband’s blessing.

The great love of her life was, in fact, Voltaire (one of the greatest French writers and intellectuals)

Together they spear headed the Enlightenment Movement, where reason not superstition became a priority.

This was very important for women because as the society became less superstitious, women were then less likely to get burnt at the stake as a witch!

Emilie created a scientific laboratory at her Chateau and she had a library of over 21000 books one of the largest of its day.

Voltaire was not her only lover: In fact one time Voltaire returned home from a journey to find her in bed with a younger lover.

Apparently, she didn’t even blush, simply saying: “I thought you would be tired after your journey and didn’t want to bother you.”

I think too often famous women are painted as either saints or sinners rather that human beings with a vast array of personality, intellect, desires and needs.

She feverishly worked day and night to complete her final work which is still used today, in French schools and universities.

Because at 42 she discovered she was pregnant and had a premonition that she would die.

Sadly she did, medicine had little to help middle aged pregnant women in those days.

So today I would like to doff my hat to her little known giant genius.

She was an extraordinary example of success, love and happiness and we owe her a great deal.

PS: If you would like to understand the 22 Principles of Success, Love and Happiness come to my FREE 1 Day Event.

We have new dates in Sydney and Brisbane and Melbourne is coming up this Saturday, 12 March.

To register for any of these events  CLICK HERE

PPS: If you would like to share this event with friends and family then feel free to copy and paste this URL into emails or social media we would love your help in getting as many people to discover these amazing tools as possible http://www.pipmckay.com.au/events/